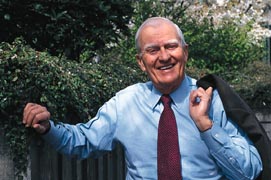 Governor John Spellman appointed Jim Ellis as an inaugural board member to meet the challenge of developing the state’s first and primary convention center on May 17, 1982.  Jim served as Vice Chair and was part of a nine-member board authorized by the Legislature to design, construct and operate the Washington State Convention & Trade Center. He then served as Chair from 1986 to 2002.

His leadership and visionary style had no boundaries for projects that he touched. In the first Convention Center Annual Report of 1986, Jim recounts the start of construction for the Center.  Initial construction began in the fall of 1985 and continued through 1988.  The greatest logistical challenge was spanning 12 active lanes of Interstate 5 with a large truss structure, upon which the Convention Center would be built. The building was “topped off” on May 28, 1987, with final construction of the Center completed in the following year.

In June 1988, Governor Booth Gardner cut the ribbon with the Board at the civic dedication ceremony for the award-winning Center, and the doors opened for business.  Also, in attendance were Seattle Mayor Charles Royer, former Governor Spellman and members of the Center’s Board. 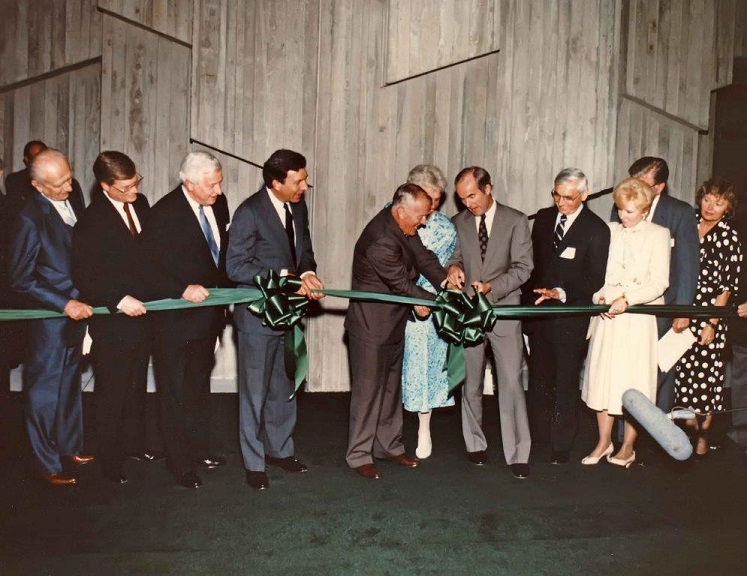 Routinely pushed to capacity throughout the first five years of operation, it was clear to the Board that the Center would need additional heavy-load exhibit space to meet increasing demand.  Discussion of expansion across Pike Street began in earnest in 1993 as civic leaders also looked for ways to revitalize the depressed retail core of the city. Plans for an enlarged Center and a downtown Seattle renaissance initially started with support from the Nordstrom family, the office of the Mayor, and members of the retail, business, labor, and hotel communities.

In 1993, groups from business and labor formed “Citizens to Expand the Convention Center” in order to secure legislative authority and funding for a development study.  An 11-member city/state task force was established by the Legislature to determine criteria for a feasible expansion.

In 1995, the task force recommended, and the State Legislature authorized, expansion of the Center on the condition that at least $15,000,000 in commitments be secured from other public and/or private sources before state funds could be spent.  The following year, the City Council voted unanimously to support the expansion by adopting a memorandum of agreement.

Public/private partnerships were critical to the success of the expansion project over Pike Street.  After advertising for proposals, the Board selected the R. C. Hedreen Co. to purchase certain surplus Convention Center property, to build the northwest hall podium structure, and to build the four-star Elliott Grand Hyatt Seattle hotel.  Trammell Crow Company was selected as co-developer of the One Convention Place office tower.

The design of the overall Pike Street expansion project represents the talent of three design teams: LMN Architects (Convention Center), MulvannyG2 Architecture (hotel designers), and Callison Architecture (office tower designers).  Working together with the Center’s Design Committee, the architects, artists, and city representatives created a urban design which fit into the fabric of the adjoining neighborhood in the early 2000’s.  The office tower was completed and occupied in December 2000, the hotel in June 2001, and the Convention Center facilities opened for events in August 2001.

A Legacy of Civic Leadership

Jim Ellis served with steady leadership of the Convention Center for 20 years, exceeding the expectations of the Legislature’s original direction that a public, non-profit corporation be formed to build a state convention center in Seattle. The resulting enterprise has added jobs and economic strength to the region and has sparked a renaissance in the downtown of its host city.  This economic engine has also pulled behind it a payload of net cash flow for the state and local government and a full train of civic benefits that include low-income housing, historic preservation, public parks and plazas, and support for arts and culture.

Today, and on behalf of the Board of Directors and staff of the Washington State Convention Center Public Facilities District, we honor Jim for his strong perseverance to lead the work through good times and bad, and his leadership leaves a significant legacy of historic preservation, affordable housing, civic benefits to citizen owners, and an outstanding facility.  Residents of Washington can take pride in their Center as a welcoming place for all as we continue to realize the economic and civic benefits the Board set forth to achieve.

It is hard to believe so many years have passed since the Center opened its doors in 1988.  Jim was able to lead with integrity and style to cultivate an abundance of public trust – that cornerstone enabled our board to deliver on the promises made.

Jim, thank you for your many years of public service and friendship. We know that your work has left a tradition and legacy with a winning spirit to secure a bright future for the Center – one that continues our tradition of delivering civic and economic benefits for our community.   As we remember you saying many times, “Good Show!”

Chairman of the Board